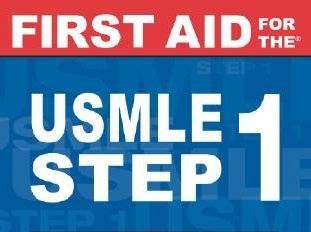 First Aid for the USMLE Step 1
First Aid (FA) book should be the most important book for your studies for the USMLE Step 1. You should make all the other books secondary and make FA the primary book. I can remember page numbers of certain sections even to this day from FA because I read the book at least ten times. Keep in mind that I didn’t go page by page in order like reading a regular book. I had to flip back and forth in between chapters to have a good study flow. For example, for Henoch Schonlein Purpura is a vascular disease and it’s located in the cardiovascular chapter of FA, but it’s also associated to IgA nephropathy, which is explained in the renal chapter. So you cannot read the book in order like a regular book. I went through FA with Doctors in Training (DIT) course because there’s no way I can sit there and try to figure FA out. Without DIT I would’ve been lost while trying to go over FA.
NBME & USMLE World Assessment Exams
These exams should be used to see where you are at in terms of your strengths and weaknesses. The USMLE World Assessment (UWA) tests are also good too, but they over estimate. There are two versions of UWA tests, but I did only UWA 1 and didn’t do UWA 2 because they said UWA 1 is more accurate. NBME exams are written by the same people who write the USMLE exams so, it’s only logical to take those exams before taking the real thing. You should never go take the exam without doing 2-3 of NBME exams. NBME exams are expensive though; each exam is $50 by itself and $60 with feedback. At the beginning I did NBME 7 but I think NBME 11,12, and 13 are closest to the exam. To get an idea where your USMLE Step 1 score will land on, take the average score of all the NBMEs.
I hope this post helps, at the end of your studies you should be reading First Aid book over and over again while doing at least one block of USMLE World questions per day.